Polar North and... The Brighton Storm 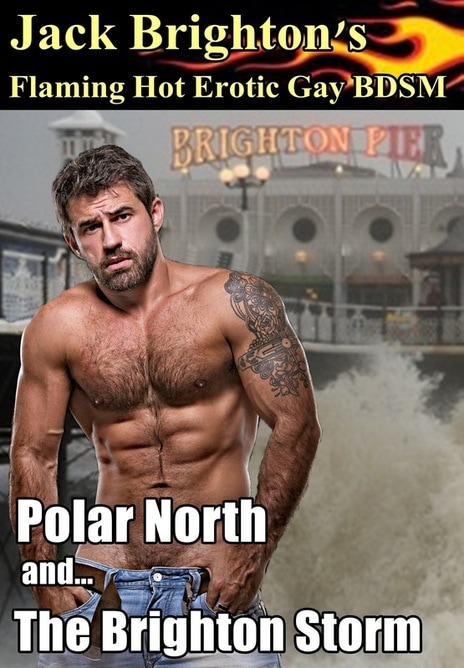 ‘DEPUTY MAYOR IN GAY BONDAGE SCANDAL’
That was the headline that heralded the storm – one of two to hit Brighton in February 2014. The other was weather based and played havoc with the West Pier, but this one was all about the city’s seedy underworld where Jack Brighton’s new hero, Polar North, is an established player.
Polar is a mongrel by his own admission: a mixture of Scottish and Brazilian genes, which has resulted in a truly lovable rogue, who is smart, savvy, sexy as sin and wonderfully dominant, a real brute of a man with a caring side. Having drifted south to Brighton, Polar owns a run down club in one of the less salubrious parts of town, from which he runs a group of rent boys who specialise in gay BDSM. So when London’s deputy major falls foul of entrapment whilst visiting Brighton, interested parties look to Polar as the obvious source of the lad who has sold his story to the press. Sadly the main interested party is a certain Lennie Morris, boss of London’s East End mob, who had the corrupt deputy mayor in his pocket, helping to push through his latest development deal. The man’s disgrace has seen this shady business venture go up in smoke, resulting in a loss of four million pounds, and not surprisingly, Lennie’s after blood.
It sets in chain a fun packed adventure, with Polar and Tucker, his best friend and trusty second in command, using their guile and connections to get to the bottom of the scandal and find out who really is responsible. Their methods are varied and highly questionable, but hugely thrilling... A freelance journalist will be abducted, put in bondage and cunningly interrogated, succumbing to a combination of extreme agony and ecstasy. A homophobic bouncer will get his comeuppance, severely compromised by Polar and his boys with a dream that turns into a waking nightmare. And Kenny the Geek has to be handsomely rewarded in a very unorthodox way for the help he gives to the man he calls ‘sir’.
The Brighton Storm is a gay BDSM adventure story, full of humour, raunchy sex with a serious edge, and unusually for the genre – an actual plot that readers will find gripping. It is also Jack Brighton’s tribute to his adoptive city, set at the time of the real Brighton storm, and an introduction to Polar North, a lovable rogue who we’ll see a lot more of.

Click on the book cover to go to Smashwords where all formats are available, or Order e-book direct from: Kindle / Nook / Kobo / iTunes /