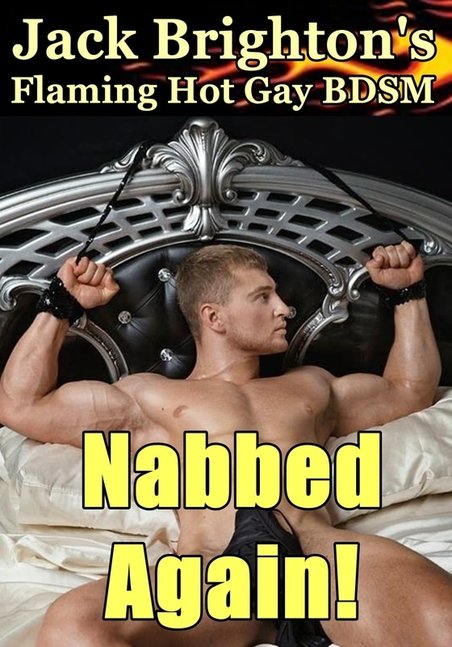 Ross was minding his own business: lying on a bed, hands and ankles cuffed, a gag over his mouth, clamps on his nipples and a dildo prodding his asshole! It was only a bit of playful bondage fantasy to spice up his life – his sickeningly perfect boyfriend being to prim and proper to give him the real thing.
Then the afternoon takes a frightening turn when unexpectedly the maintenance man arrives!
Bad? Well yes! It would be hideously embarrassing to be found by anyone in this state. But there’s even better, or worse you might say – for would you believe that the maintenance man who stumbles upon him in this depraved and helpless state is none other than Nab McAlister!
He’s a bit of a brute is Glaswegian Nab – big and brawny with plenty of muscle, mean and nasty
with the devil’s own temper, ruggedly handsome and hung like a horse, and permanently randy as well. He’s straight as a dye, or so he will tell you - unless he hasn’t had his hole for a while. Then he’ll happily ride a tasty young lad, and ride him good and hard. ‘Nabbed’ is what they called it when he served his time in jail – and plenty of lads got ‘Nabbed’ in there.
He’s also a bruiser who’s bearing a huge grudge – Nab tackled the wrong man a little while back, and paid heavily for the mistake – the Nabster himself getting Nabbed! Now he stumbles upon poor unfortunate Ross and he’s presented with the ideal opportunity to vent his suppressed rage.
Is this a fantasy come true of a nightmare in the making?
Ross is going to get ‘Nabbed’ that’s for sure. But will he want to get... Nabbed Again!