Bennie and the bears - A cub in the dark 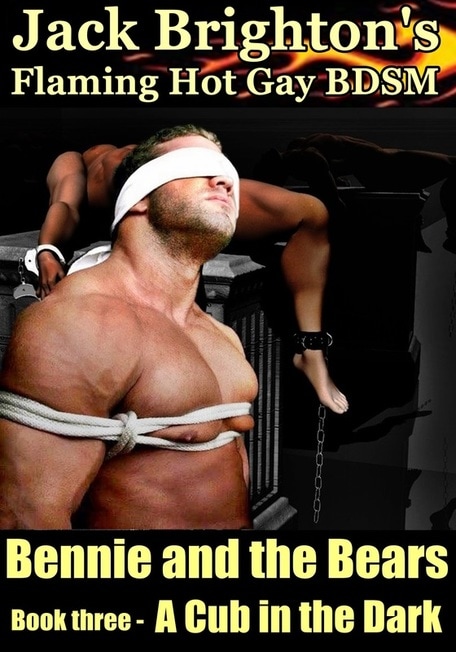 Another weekend has arrived, which means another adventure for Bennie Baxter with his two fabulous grizzly bears. Having experienced the joys of bondage and the darker side to Dr. Jim Calder, Bennie finds himself in bondage again but on this occasion he is blindfolded for much of the time as he is given a flavour of ‘In the Dark’. There is also a twist in store for the nineteen year old rugby player when he learns that there will be extra company in the form of another cub!
It proves to be a very eventful day for Bennie. The opening match of the rugby season sees Aberdeen take on Stirling at home. It’s Bennie’s first appearance for the university team, and the first time the bears watch him play, although he is unaware of their presence. He’s very aware of an opponent, though – a stunning hunk from Stirling who gets up to all sorts of mischief both on and off the field, especially afterwards in the communal showers where he gets young Bennie in a right old tizzy.
Jim Calder is up to his tricks again. After the match, Bennie finds him alone when he arrives at the house, and trust is seriously put to the test in the kitchen. Bennie has his muddy rugby kit in his bag having been told to bring it along. He puts it back on because a punishment is in order as the cub has been a naughty boy while wearing it earlier. Then it’s up to the bedroom for some blindfolded bondage and some serious mind games in the dark. Scott McKay arrives with another cub who Bennie doesn’t get to see. He has no idea who it is, but Bennie perceives this lad as an unwelcome rival and a threat to his relationship with the bears as only one of them will be allowed to stay the night, while the other will have to leave after a couple of hours and perhaps never return.
It’s a rollercoaster ride of mixed up emotions that accompanies the brilliant sex that ensues. Physically Bennie relishes the challenge, but how will he mentally cope in the dark with all the mind games that the bears are playing?

Click on the book cover to go to Smashwords where all formats are available, or Order e-book direct from: ﻿Kindle / Nook﻿ / Kobo / iTunes / Amazon UK
Powered by