BENNIE AND THE BEARS - THE RUGBY CUB 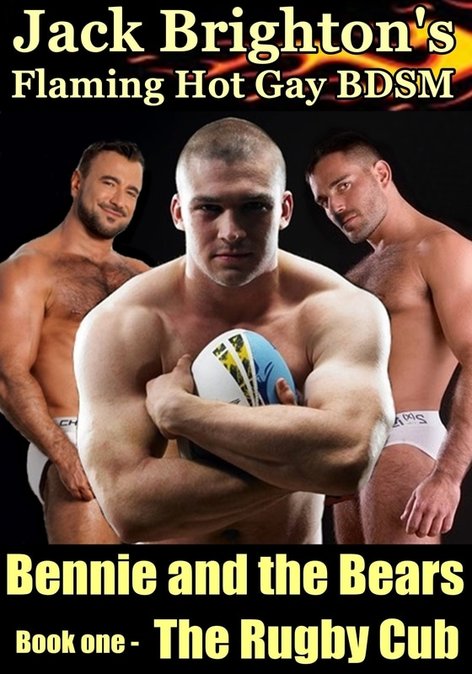 Two grizzly bears looking for a discreet but adventurous cub to play with!
That's how it started - an internet ad that Bennie stumbled upon. It sounded perfect for the randy nineteen year old lad. He needed discretion due to his widowed mother's religious beliefs, and the fact that he played rugby where homophobia is rife. He also really likes big hairy men of the mature variety. But could they possibly measure up to his far-fetched dreams, or would they turn out to be a pathetic joke?
Jim and Scott more than measure up! These two grizzly bears turn out to be a dream come true for young Bennie Baxter - The Rugby Cub. Both are incredible hunks of men who are wonderfully blessed in the trouser department. But it wasn't all plain sailing on the first encounter. There is a power-play going on. Jim being the one who is looking to seize control of the situation. He's a lecturer at Aberdeen university where Bennie is a student, hence his need to be discreet. Dr. Jim Calder is an expert in Behavioural Psychology, and decides to put into practice some of what he preaches. He wants to have Bennie under the thumb, and bring his boyfriend to heel as well.
Jim's assertive behaviour comes as a surprise to boyfriend Scott. At twenty-nine he's six years the junior in the decade old relationship, and is the one who has insisted on bringing in other men. Scott likes to top as well as bottom, and Jim has never been very keen on putting out for him, hence Scott's desire for a cub to play with. It was Scott who historically pulled the string in the three-way fun when they lived in Glasgow. But now in the Granite City of Aberdeen, Jim turns everything on its head - resulting in a first session with Bennie that is out of this world, and one that everyone thoroughly enjoys. It's so good in fact that Scott might put it into one of his books. He's an author, you see, specialising in hot steamy erotica, and goes by the pen name, Jack Brighton - and his books are going to act as inspiration for the fun and games that follow.
So try it and see if you find it inspiring - this first of many adventures for... Bennie and the Bears. Click on the book cover to go to Smashwords where all formats are available, or Order e-book direct from: Kindle / Nook / iTunes / Kobo / Amazon UK
Powered by